A new blog to talk about emulator development

I've been hacking on emulators for a while. And now I decided to create a new blog focused exclusively on emulation. I may still write here in this blog about other random stuff. But all the emulation topics I intend to post at http://mamedev.emulab.it/fsanches/ (specially the things related to my contributions to the MAME and MESS projects). I started that new blog by talking a bit about how I started to get involved in the emulation community.

There needs to be a balance! DRM is not the way towards that goal.

This message was sent by me today to Mozilla's CTO in response to the recent announcement of Mozilla's strategy to implement DRM technologies in their popular Firefox web browser. Please read below my opinions on that topic and consider writting to Andreas Gal with your opinions as well. You can read more about the issue at the FSF website.

DRM mechanisms are algorithmic implementations of the copyright holders intentions. Given that the copyright holders tipically do not want society at large to enjoy the work in any way that is different from what is encoded into the implemented DRM algorithms of their choice, then it is clear that such restrictions can only be enforced effectively by implementing DRM as proprietary software, so that the users have no way of getting rid of the imposed restrictions. Such restrictions apply forcefully even when not supported by the law. Actually, the trend to use criptography to strengthen such restrictions demonstrate how hard copyright holders are willing to impose powers they do not fully possess according to copyright law. As said before, copyright law (and the power it gives to copyright holders) is not abolute. Even when society needs to benefit from a copyrighted work in a way that would be considered perfectly legal according to the copyright scope limitations prescribed in law, DRM still inflexibly blocks such legitimate attempts of enjoying the work.


As pointed out by Lawrence Lessig: "Code is Law". For this reason, we must reject DRM technologies, as it disrespects the rights of the computer users. That is... DRM-encumbered works sistematically disrespect the rights of society at large to legally enjoy such works in ways prescribed by copyright law.


Please. For the sake of respect for the users of Mozilla products, please reconsider Mozilla's stance on this matter. 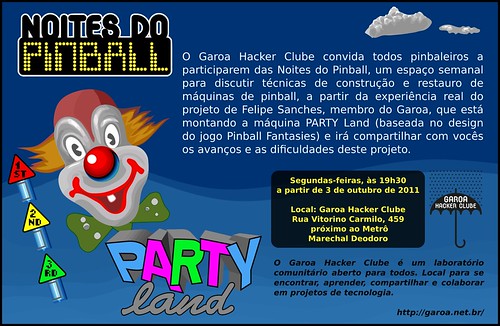 Some months ago I have started to mantain a wikipage at LibrePlanet.org with a list of device drivers that require non-free firmware. For each device I created a wiki page to aggregate technical information about the device in order to make it easier for us to develop free firmware.

Then, during November I have travelled around Europe and have had the opportunity to hack on a laser projector in the Prague hackerspace. The special thing about it is that we developed free software for it but we still rely on the binary-only firmware to startup the device. And I was annoyed by that so I continued investigating and ended up discovering that the device has an EZUSB (which is a 8051 microcontroller with native hardware support for USB communication). Then I have found the datasheet for this microcontroller and started to study it. I even used a disassembler in order to inspect the firmware and things started making sense, but I got concerned about the legality of reusing code from this disassembly process.

At that point I figured out that I should check the wiki page again to see which other devices are using the same microcontroller because that was valuable knowledge that I had just acquired that could be used to free some firmware. So I searched for "ezusb" in the kernel source code and found 3 devices that also use it. One of these devices (DABUSB/TerraTec-DrBox1: a digital radio receiver) has its binary firmware distributed under copyright terms that allow free, derivative works:

So this means that by disassembling the firmware, the resulting source code is free. I've done it and now we just have to understand the code and give nice names to the variables and routines in order to have a free firmware for the device. I've been doing it yesterday and today but then I stopped for a while and started to question myself whether it is actually useful work. I am concerned that this is a device released 11 years ago and I don't know anybody who uses it nowadays. So I don't know what is the real demand of support for this specific device.

What I mean is that we need better understanding of the meaning of the LinuxLibre blacklist of devices. We need to figure out a way to sort these devices in a relevance order so that we can focus our reverse engineering efforts on the most critical ones. I suggest that we start a working group to define the criteria for sorting that list and continue this work with some better strategies. One of the possible ways to sort these devices by relevance would be to build statistics based on collecting hardware information of libre-distro users.

I hope someday we'll be providing fixes to the issues raised by the LinuxLibre project instead of simply removing functionality. I think that this perception that lots of people have of LinuxLibre as a less functional, technically inferior alternative to Linux is a real danger. I know that we should not judge software only by its technical aspects. Nevertheless, this is still no good advertising for LinuxLibre.

I'd like to hear your opinions about these questions.

I just got back to my home in Brazil yesterday. Travelling in Europe was great and I'd like to share here the details of some cool things I've done in my last week there.

My last stop in Europe was Prague and there was a special reason for that. Three months ago I received an email from Cestmir Houska, one of the members of Brmlab - the Prague hackerspace. Cestmir was contacting me because he got inspired by my photos and blogposts about the Party Land Remake project. He told me that building a pinball machine was one of his dreams from childhood (which happens to be my case also) and that he wanted to keep in contact so that we can help each other in making it become a reality.

Since we are both members of recently inaugurated hackerspaces we figured out that our pinball projects could be understood as a healthy collaboration between them, mutually. So we are planning to design, document and simultaneously build two pinball machines: one in Garoa Hacker Clube, in São Paulo, Brazil; and the other one in Brmlab, in Prague, Czech Republic.

So, since I had the opportunity to visit Europe again due to the Mozilla Drumbeat Festival in Barcelona, I decided to schedule a visit to Prague (which resulted in my visit to Metalab in Vienna also).

In one of the days that I was there at Brmlab, one guy showed me his personal project: a homebrew laser projector. It is composed of 3 lasers (Red, Green and Blue) and a pair of mirrors that are rotated by motors so that the laser beam aims at the wall in different possible angles. By properly controlling those lasers and mirrors, one can draw colorful shapes on the wall. The effect is even more interesting if you add some fog to the room :-)

So I promptly asked him what software he was using to run the laser projector and the answer was: iShow, a proprietary software. I still inquired about free software implementations of drivers or controlling software but he was not aware of any existent efforts. So we decided to start doing that right away. We installed an USB sniffer on his Windows machine and started reverse engineering the protocol used by the device. In half an hour we had our first line drawn by sending URBs through a python script running on my GNU/Linux. Then we spent more 3 or 4 days improving the python module (all source code is in my personal svn repository at Google Code) and implementing some demos:

We wanted to display the Brmlab logo, so I decided to do that by implementing a simple SVG loader. It parses the SVG file and reads the d attribute of all
Posted by Felipe Sanches at 11:26 AM 4 comments: 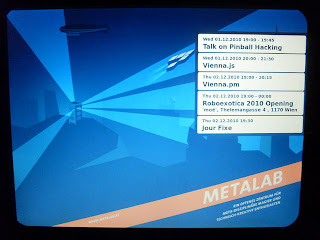 I am currently in Vienna, Austria, visiting the Metalab Hackerspace. They have a very nice EPILOG 36EXT laser cutter there and I couldn't avoid using it to cut more parts for my pinball project! So I focused on the upper playfield (ramps, loops, P-U-K-E platform...).

This is what those parts are supposed to look like in the end: 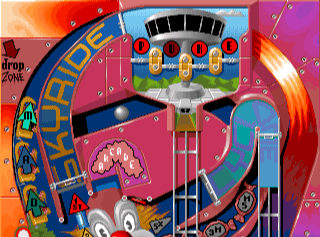 And you can see how they look like now in these photos: 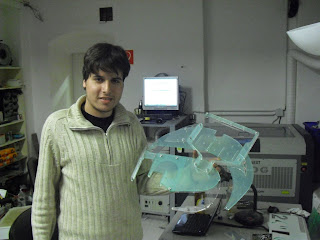 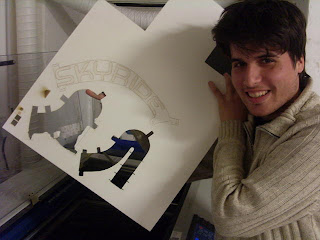 I still need to apply artwork to these acrylic parts. The stickers that I'll use in the project are these: 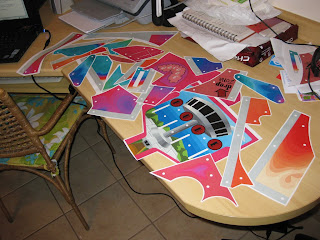 I also presented a speech about the project trying to get more people interested in hacking on pinball machines DIY manufacturing fun.

Then I also got the opportunity to help on the Roböxotica festival by laser-cutting the wood trophies for the cocktail robots contest! 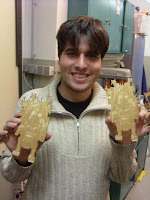